Beware of LinkedIn phishers who can come in a variety of guises. It’s easy for them to learn what business you’re in, and then they use fake accounts to connect. When they do, they’ll try to set up a relationship with you so they can get your data.

In my case, I get requests to connect from profiles that purport to be other web design companies. I had two in my inbox waiting for my review. These profiles include the following features:

For example, when I looked at the profile for Nick Jones, the location under his name says he’s in San Francisco but his company is in the United States. (You will note that the link doesn’t work, and I’ll explain why later.)

There is one easy way to check to see if someone is who they say they are: Google their business. 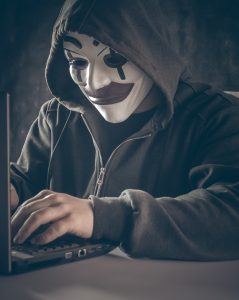 If you can’t find their business online, then this person is probably not real. In my case, no web designer would not have their own company website.

Years ago when I was naive, I accepted a couple of similar connections. I soon received e-mail spam from web designers saying they were from India. I didn’t even know if that was true, so I deleted those connections and stopped accepting others.

Until November 20. I wanted to see what would happen when I connected with Nick Jones. So I did.

This is where I was thrown a curveball. Nick sent me an e-mail message the day after we connected. He claimed he’s an account manager for Seedcart, an e-commerce design firm in Columbus, Ohio. And he said that I must be so busy that I didn’t have time to respond to him. His message included a phone number with the 510 area code, which is in the San Francisco area.

Once I read that, I went to my LinkedIn messages and found our message exchange was gone. Then I saw that his profile was gone. I checked the phone number in his e-mail message on various “who called me” sites, but Nick’s phone number wasn’t flagged as a spammer. I found the number wasn’t trusted, either. His e-mail account had a Seedcart address, though.

I responded to Nick and told him I hadn’t responded to him because he deleted his account. Then I told him I wasn’t interested right now, and he told me to get back to him when I was ready.

I also sent a message to Seedcart asking about Nick. I received no response.

Did Nick delete his LinkedIn account because he found someone to try to scam? It’s hard to tell, but I feel better knowing I tried to find out if Nick was who he said he was.

So, the moral of this story is to beware of LinkedIn phishers. It’s easy to find out if they’re real. When you can’t, their behavior makes it easy for you.

If all else fails, don’t connect. In this case, anyone using LinkedIn should know the rules of that platform. That is, have a complete profile, tell people what company you work for, and make it easy for people to find you elsewhere online.

Stay safe out there.

Eric Butow is the owner of Butow Communications Group (BCG). Eric can help you tailor your company’s digital marketing. Set up a meeting with BCG!