I’m officially vaccinated. That is, as of May 4 I exited the two-week vaccine growth period and now I’m protected against COVID-19.

As someone who gets a lot of shots, getting shots for COVID-19 was just one more thing. The process also went about as smoothly as I could have expected.

Here in California, vaccinations were available to people with pre-existing conditions on March 15. I had a phone meeting with my primary doctor on March 19 anyway, so I talked with him about it. My doctor approved the shots and wrote a letter to give to the people at the Amador County Public Health building where the shots were given.

It turned out that I didn’t need the letter, but it confirmed that I have COPD. I called the county public health department and to my surprise, they set up an appointment four days later.

Since Amador County only had the Moderna vaccine at the time, I got my first shot on March 23 and my second shot on April 20.

The picture below shows me after my second dose of the Moderna vaccine on April 20. I had to wait 30 minutes after the shot because I have some food and medication allergies. 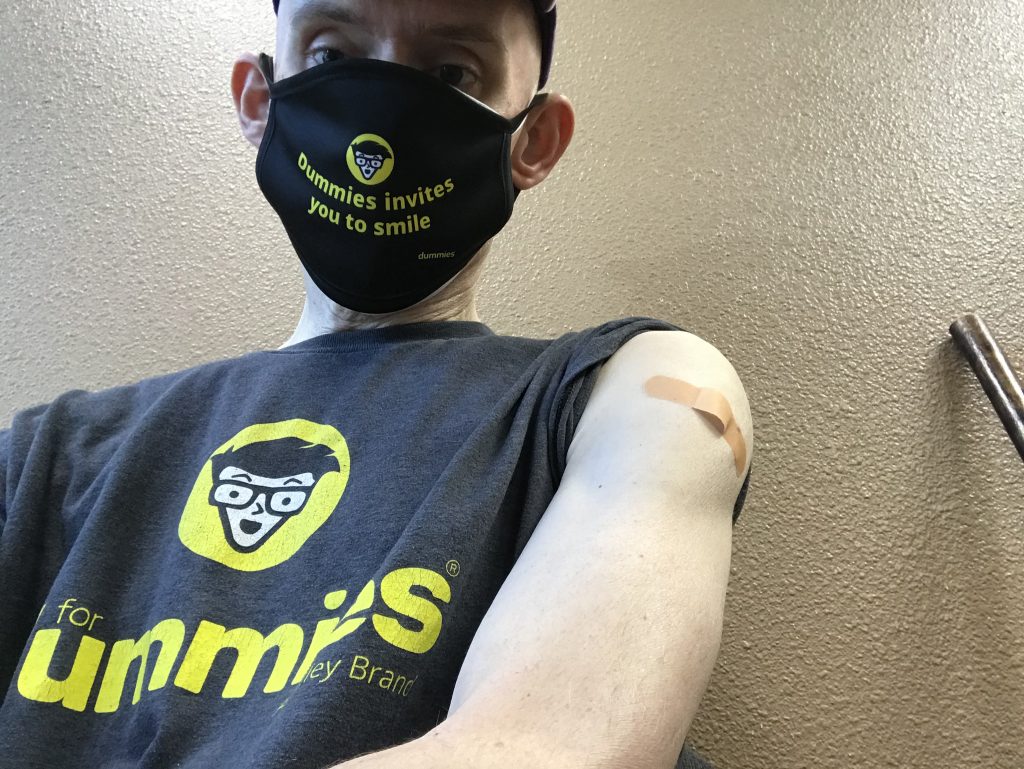 My 80-year-old mother got her shots on the same dates and times that I did. She hates needles and dislikes doctors, but she went to get her COVID-19 shots. And she reported that she barely felt anything with both shots. Now she’s encouraging other people to get their shots.

Everyone has different reactions. My mother had a sore arm after the first shot but had no problems after the second.

I had a sore arm and a couple of chills after the first shot and a night of body heat and soreness after the second shot. I think the biggest problem from the second shot came from the stress on my body that made some existing medical problems worse for a time. It seems I’m back to baseline condition.

The moral of this story is to get your vaccination shot(s) if you haven’t yet. If the system is smooth in a small county like Amador, then it’s probably as smooth where you live.

I also posted a memory on Facebook today with two of our graduated daycare kids. The boy turned 3 years old today, and his sister turns 6 years old on Saturday. My post comment said, “one year gone, just like that.” As the old saying goes, the days are long but the years are short.

One of my friends responded that even though he doesn’t like wasting time, he’s glad the last year is behind us.

He had a tough time in the last year as a teacher at an area community college. He faced down his challenges and pivoted to online teaching well.

Even so, I couldn’t relate. For me, the tough year was 2017. 2020 felt weird, but not much changed. My mother and I had the two daycare kids until August when the oldest one graduated and went off to kindergarten. I still had plenty of work writing books without as much noise. My mother did some deep cleaning around the house, too.

But it is nice that I’m officially vaccinated. My friend and I plan to get together later this month and resume our monthly lunches that were interrupted 14 months ago.

I hope you’re vaccinated, too, so we can all get COVID-19 behind us and get back to work — and play.

Eric Butow is the owner of Butow Communications Group (BCG). Eric can help you tailor your company’s digital marketing. Set up a meeting with BCG!